Our proposal involves extending the scenario to allow for more sophisticated multiple hand-bot behavioural dynamics. We propose replacing the single book that had to be retrieved (and that was criticised by the referees) with multiple objects spread across some shelves. The objects would be rectangular objects with varying attributes (e.g. material, size, weight, LED colour etc). The task would then become to first identify some appropriate subset of the objects, retrieve them from the shelves, and then (possibly) to use them to build some form of structure.

We imagine that eye-bots could detect the presence of objects on the shelf, but not be able to discriminate between objects with different attributes - such discrimination would require close up sensing by the hand-bots. Thus the eye-bot could direct foot-bots and hand-bots to the appropriate shelves, but only the hand-bots could pick out the required subset of objects. Hand-bot discrimination could either be through close up camera based sensing, or through some kind of manipulation (lifting, give it a squeeze!). For an attribute like object length (or weight), multiple hand-bots might need to cooperate to find / select the right objects.

Depending on the parameters we use to set up this scenario, we think there are many interesting research possibilities, especially to explore swarm dynamics - both heterogeneous and within a swarm of homogeneous hand-bots. For example, with a high density of hand-bots, the hand-bots could collectively search the vertical plane in a similar fashion to which the eye-bots search the ceiling plane by forming some kind of communicating network. Alternatively, when the hand-bot density is low, foot-bots could be used as markers to delineate already explored segments of the plane. Multiple hand-bots might be required to lift long, bendy, or overly heavy objects.

To integrate this proposal into the existing Swarmanoid documentation, we propose to extend the existing task and environment complexity matrices as follows. Modifications are indicated in bold. Explanations/justifications for modifications in italics. 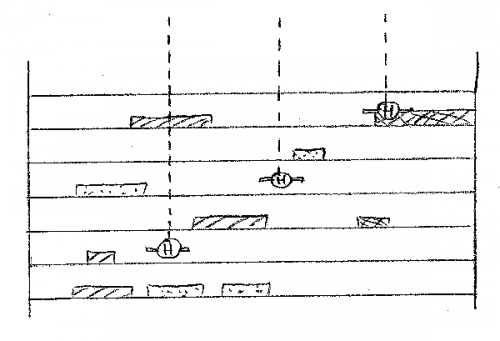 A swarm of hand-bots searching for objects of a certain type in a shelf.

The eye-bot is required to explore the environment in order to identify the shelves which holds the objects and attract foot-bot/hand-bot groups to it. Foot-bots transport the hand-bots to the shelf and the objects back. The hand-bots have to communicate which robots searches which part of the shelf. Due to low hand-bot density, foot-bots are used to mark already searched areas. Hand-bots need to squeeze each objects that look like the target object in order to find out which are the soft ones.