[edit] How to set up the environment

[edit] Set the light intensity of the Robotics Arena 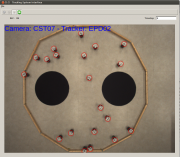 [edit] Adapter for the cameras