What is the common interface, and why should we use it?

Write Controller Once, instead of modifying for each platform. 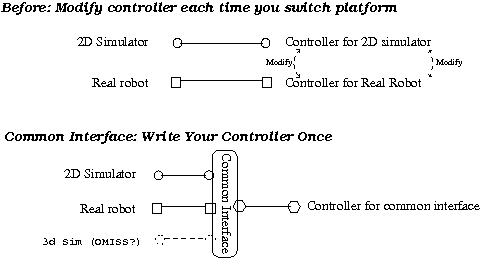 Everyone shares a common build environment. We can stop reinventing the wheel.

Write your own common interface controller

You will need to familiarise yourself with the basics of source code control using svn. If you are already familiar with cvs this is a piece of cake, as svn commands are by in large a superset of cvs commands.

When you write your common interface controller, you basically have to implement three functions

Everything else is done for you.

If these directories do not exist you will have to create them and add them to svn with the svn add command.

To compile your controller on the real sbot

To compile your controller in twodee

How to make your simulator compatible with the common interface

The s-bot common interface is a super class specificing the interface. For the real s-bots specialization, all methods have been implemented so that the s-bot API is called, while in TwoDee another specialization in which the simulated robots are controlled instead.

How the common interface was implemented in TwoDee