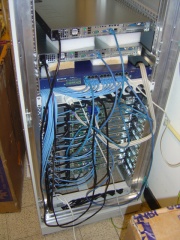 Step 9
The client proceeds with the normal linux boot, activating all the services specified in the default run-level (2).